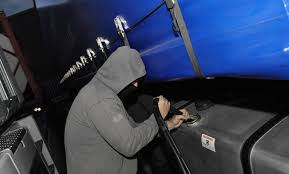 Once again Mike Dawber from NavCIS gave a really insightful overview of the freight crime statistics. Whilst freight crime in the UK has in general reduced during lockdown, Yorkshire continues to be a crime hotspot with Normanton and Wakefield being among the worst hit areas.

‘Round the Corner’ crime is particularly prevalent and Drivers should be reminded NEVER to deliver to an alternative address unless they check with THEIR OWN transport office.  Freight Train recommends that such instruction is included in a Drivers’ Handbook.

Google ‘Romanian Rollover’  – another frightening crime that is on the increase in the UK.

To raise awareness, not only of the cost to our industry of freight crime, but also the danger to our Drivers, please ensure that all vehicle/freight crime, no matter how small, is reported in the first instance to the police, but then please also e-mail NaVCIS at freight@navcis.pnn.police.uk.

Our keynote speakers were:

There were so many top tips it is impossible to list them all, but here are a few:

January 21 saw the launch of freight people.  Over 50 people attended and so a massive THANK YOU to everyone who supported us and for the kind feedback received – we were overwhelmed.

Our hot topic for the first event was bridge strikes. Transport lawyer Laura Hadzik from Backhouses gave an engaging presentation. This is a forum for fleet operators, which promotes open conversation and learning, but which can only occur if we are open, honest and allow ourselves to be vulnerable and talk of our experiences. Thanks also therefore to one of my valued clients who spoke of her Company’s experience of a driver hitting a bridge and the emotional, commercial and financial consequences.

These two presentation generated much animated debate. Everyone went away with lots of food for thought and ideas on how to protect their Companies by incorporating best practice procedures.

The next event on 18th February will cover the hot topic of vehicle crime.  Details can be found by searching for freight people on www.eventbrite.co.uk

I loved the sense of community as once again young and old congregated to cheer on cyclists and support the Tour de Yorkshire. Once again this year we enjoyed glorious weather, which served to showcase our fabulous Yorkshire countryside.   Subsequently I have seen an abundance of cyclists on our roads.  Each morning there have been illuminated signs on the way to work warning motorists to ‘watch out for cyclists’.  The transport community and in particular HGV drivers are all too well aware of the necessity to share road space and to be particularly alert to any vulnerable road user.

Most transport companies have vulnerable road user policies in place. HGV drivers attend Driver CPC training with regards driving defensively and being alert to cyclists and  when driving in areas posing particular hazards such as around schools, shopping precinct, parks etc.  Indeed some truck drivers have ridden bikes for half a day to appreciate what it feels like to be a cyclist on the road.

Rarely do we see signs on our roads alerting cyclists to the dangers they face on our roads. Many cyclists, especially those who are inexperienced, have just taken up cycling, or children are particularly vulnerable and unaware of HGV blind spots, the particular danger of undertaking HGVs, when to use the Advanced Stop Line (ASL) and the importance of making eye contact.

This is an opportune time to reiterate Freight Train’s safety advice for both truck drivers and cyclists. in order that both parties may enjoy driving and cycling safely. Download our flyer:

The draft Drivers’ Hours and Tachographs (Amendment etc.) (EU Exit) Regulations 2019 (draft Regulations) together with an explanatory memorandum were published on 14 January 2019. The key provisions will come into force on exit day.

For road transport operations undertaken exclusively within the UK after exit day, the rules currently set out in the EU Drivers’ Hours Regulation (561/2006) and the EU Tachograph Regulation (165/2014) (together the EU Regulations), relating to drivers’ hours and tachographs will continue to apply, as set out in retained domestic versions of those Regulations.

For road transport operations between the UK and EU Member States, Switzerland, or non-EU EEA Member States, the rules contained in the European Agreement concerning the Work of Crews of Vehicles engaged in the International Road Transport of 1 July 1970, as amended (“the AETR”), will apply, in place of the EU Regulations, after exit day. The AETR is a United Nations Economic Commission for Europe (UNECE) Agreement and the UK, the 27 EU Member States, and a further 21 countries (including EEA Member States Norway and Lichtenstein, but not Iceland), are contracting parties to it. As the EU Regulations and the AETR contain the same rules, international road transport operations will be subject to the same drivers’ hours and tachographs requirements from exit day as before exit day.

This week is love the lorry week. Take a look at what Lesley has to say in Motor transport. 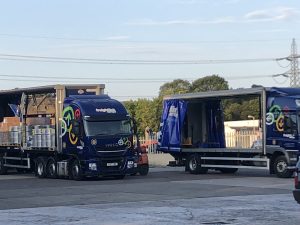 On 28 May 2018 General Data Protection Regulations came in to force.

Companies are required to ensure the privacy of their employees and any personal data which they may process. This may include telephone numbers, e-mail addresses, name and contact details, bank details etc.
Freight Train’s fair processing notice can be viewed here: https://www.freight-train.co.uk/wp-content/uploads/Q-doc-24-privacy-fair-processing-notice-April-2018.pdf

What some companies may not realise is that from the same date any organisation or sole trader who processes personal data must register with the ICO and pay a data protection fee. For further information refer to the ICO website, where there is an online tool: https://ico.org.uk/for-organisations/data-protection-fee/ 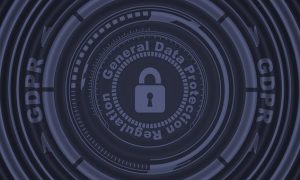 Diversity and Inclusion at the Microlise Conference

On 16 May 2019 Microlise held its annual transport conference and awards attended by over 1000 delegates. It was once again hosted by Quentin Wilson and included a host of speakers from throughout the industry speaking on subjects such as vehicle emissions and clean air zones, preventing HGV related terrorism, the rise of electric vehicles, platooning and the Brexet debate.

Lesley O’Brien held a workshop creating a case for diversity and inclusion in the workplace, arguing that every effort to address the skills shortage and attract people to our industry would be pointless if the transport industry failed to embrace a more diverse and inclusive workforce which was representative of the community in which we all live

After the workshop, Lesley was interviewed by Emma Shone of Commercial Motor https://youtu.be/Nuj-k1dmiU4

Lesley will be speaking again at a She’s RHA event being hosted by Autotrader in Manchester on 26 June.   The event is for both men and women, so please come along

For further information and to register: https://www.rha.uk.net/policy-campaigning/she-s-rha/she-s-rha-autotrader-events

The so called self-employed driver

There has been much discussion with regard to the use of so called self-employed drivers and drivers employed by umbrella companies. HMRC guidance is clear that for a driver to be self-employed he/she must have both an operator’s licence and a vehicle (click here to see our article October 2017 / article Commercial Motor). HMRC has now opened a consultation https://news.rha.uk.net/2018/05/31/self-employment-consultation/content.html 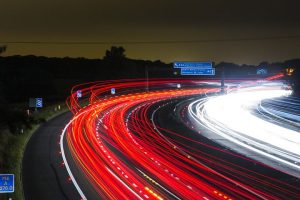 Congratulations to Lesley O’Brien for getting to the finals of the FTA Everywoman in Transport and Logistics Awards 2018, category Above and Beyond. Results to be announced on 14 June at a luncheon at the London Marriot Hotel, Grosvenor Square – fingers crossed! 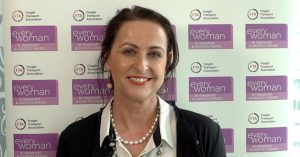 There is still time to register for Freight Trains ADR course commencing 26 June. Attendees will gain 21 hours driver CPC. Day 1 may be attended as a ‘stand-alone’ day to gain 7 hours driver CPC.

Only a couple of spaces remain on the next open driver CPC course covering drivers’ hours and the working time directive on 23 June 2018. The next open course is on 14 July and covers health and safety in the workplace and on the road.

For full details of all Driver CPC and ADR courses: https://www.freight-train.co.uk/

Sending best wishes to our trainer Garry, who has recently fallen and sustained a hip injury.   Freight Train’s July CPC course, which should have been delivered by Garry has therefore been changed from Fuel Efficient Driving to Health and Safety and shall be delivered by Lesley. 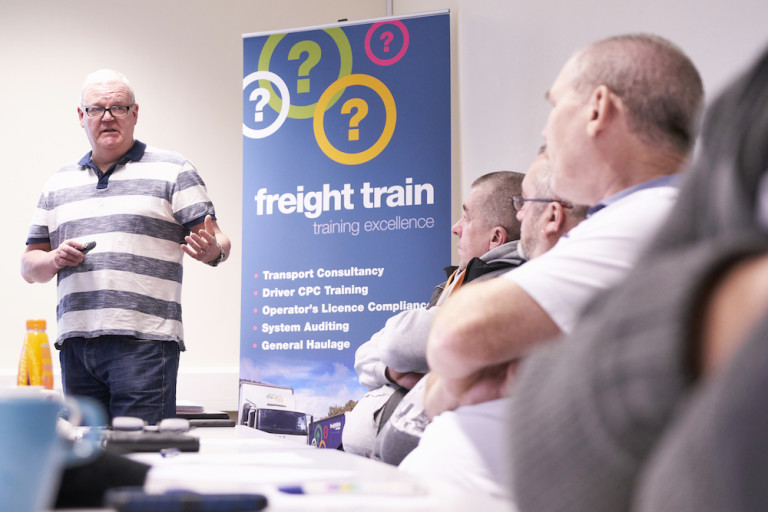 The DVSA has issued its new HGV inspection manual, detailing guidelines to be followed by vehicle inspectors. The new guidelines come into force from 20 May 2018.

It has been announced that motor insurer Lima Insurance, also known as Alpha has been declared bankrupt.

Operators are at risk of operating vehicles without insurance and should contact their broker immediately . 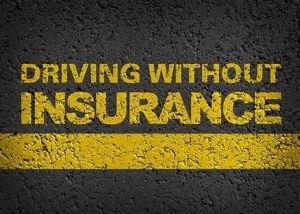 DIVERSITY – A CASE FOR CHANGE 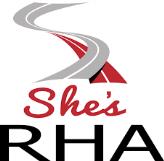 It is now 2 years since Lesley launched She’s RHA campaign on behalf of the RHA (Road Haulage Association) to improve the gender imbalance in transport by supporting, empowering and encouraging women both from within our industry and from the wider community.   The scope of She’s RHA has now extended and our focus is on making our industry more inclusive and diverse.  Lesley will be discussing the benefits of a diverse workforce at this years’ Microlise Conference on 16 May 2018.  She would love you to come along and say hello. 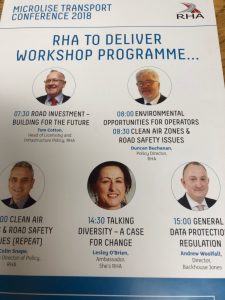 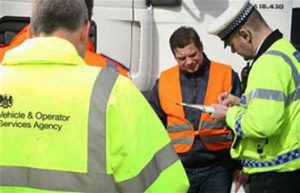 As from 5 March 2018 DVSA are able to issue graduated fixed penalties for any infringement within the last 28 days, to a maximum of 5 drivers’ hours offences, which could mean a maximum fine of £1500 for the driver.

Transport operators however need to remember that they have an obligation to advise the traffic commissioner within 28 days of any such fine.   With the risk of drivers receiving more fines, is there a risk that more operators being called to public inquiry?

DVSA has advised that use of AdBlue emulators is an offence on a par with using a magnet to falsify drivers’ hours records. Such emissions cheating devices disable the AdBlue system.  Operators found using such devices will in all probability be subject to a full fleet maintenance inspection and referral to the area traffic commissioner, who are taking a dim view of operators using such devices.

What is surprising and questionable is the claim from operators that they were totally unaware.   We suggest that operators request their maintenance provider to, where possible, check for such devices at inspection.  A simple way for operators to check however is to monitor AdBlue usage.

On 24 April 2018 at the CV Show DVSA officially launched the Earned Recognition Standard.  Head of DVSA Gareth Llewellyn thanked operators for working with DVSA to make the launch possible.

As one of the first transport operators to be accredited with the standard, sister Freightlink Europe was pleased to receive a certificate

Lesley O’Brien worked hard with the Freightlink Europe team to ensure that all criteria were met. Freight Train is available to speak to any operator wishing to apply for the standard or wishing assistance. 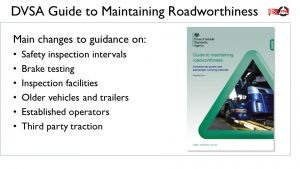 DVSA took the opportunity to launch its new revised edition of the Guide to Maintaining Roadworthiness. The guide is no longer available in hard copy, but can be accessed at:

The main updates are 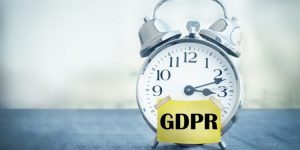 As part of our preparation for GDPR we shall be cleansing our database and only sending our newsletter to individuals with company e-mail addresses.   Should you no longer wish to receive our news, then please unsubscribe. We will be sad to see you go L

Should individuals wish to continue to receive our newsletter, please e-mail Nicola@freight-train.co.uk, requesting that you continue to be included in our newsletter.  You may of course unsubscribe at any time